Signs of spring in Southern Ontario have been quite widespread in the past few weeks - indeed, Murray and I ran two Tundra Swan viewing trips last weekend, which means Spring is slowly inching forward.

I've had the best winter I've had in a long time, largely because the winters here in Huntsville are really winters - with lots of snow, ice for fishing, cool winter birds and good mammal watching. The fact that Amanda and I had our own apartment here, and that I was busy almost every weekend guiding trips also helped a lot.

One thing I really wanted to do this winter was go look for Willow Ptarmigans in north-central Québec. I only learned that this is possible a short while back - apparently, in most years Willow Ptarmigan make it to Chibougamau, a mining town in the Jamésie region that has a well-maintained road leading to it. Indeed, there are outfitters that operate ptarmigan hunts there, and there are counts of 300+ birds in some years! It seems to me that this is one of the most accessible (and cheapest!!) venues to see a ptarmigan in winter plumage.

Unfortunately, it has been hard to organize a trip up there. I wanted to go with a few people and during good weather - which can be hard to predict and difficult to plan for. My good friend and fellow Huntsville birder and naturalist David had a couple of days off and wanted to go on the trip - but it was so that the two days he had were a Monday and Tuesday, and on the Sunday I was guiding a trip to Long Point to look at Tundra Swans. The window was narrow, and I didn't want to waste the opportunity. The weather looked great. I finished with my clients in Toronto, headed up to Huntsville and slept for about three hours until 2 am, and then Amanda, David and I headed north.

The first official bird of the trip was a male Snowy Owl a few hundred metres from Québec in Temiskaming, sitting on a post at about 5 AM. We were getting pretty tired, and the bird gave us enough energy to make it to dawn, which we greeted in Rouyn-Noranda with a temperature of -32C.

We decided to take a shortcut to the Route 113 by going up a series of smaller roads. This proved to be a bad idea - much of the roads were covered in ice and there were several treacherous washouts. One was so bad that we almost contemplated turning around - but we were almost there. Luckily, the Rav4 made it through.

While we did lose about 2 hours worth of driving, it was not all in vain. The roads, especially Route 397, looked awesome to check out for birding and insects in the summer. We passed some great looking Connecticut and Wilson's Warbler habitat, and many small streams, bogs and clearings that would have been amazing for Somatochlora emeralds and butterflies. We found where all the redpolls were - on this road - and had good looks at a fat Hoary Redpoll amongst them, as well as clouds of Pine Grosbeaks and a couple of White-winged Crossbills.

Once we got on the Route 113 that leads to Chibougamau, we were faced with a problem. We were running late, and would probably only have a couple of hours to search for ptarmigans in Chibougamau, with a real chance for failure. Our original plan included most of the day to search, and then heading back to Rouyn after dark so we can do some more birding and have a head start to Huntsville the next day - but now, it looked like we'd have to stay in Chibougamau, try for the ptarmigans the next day, and then perform another marathon drive back to Huntsville. The morale was dropping.

Suddenly, David shouted "There they are!" and I bolted upright from dozing off in the passenger seat to see a flock of birds - whiter than white - fly off from the shoulder of the highway. We pulled over and all jumped out of the car and headed towards the ptarmigans. 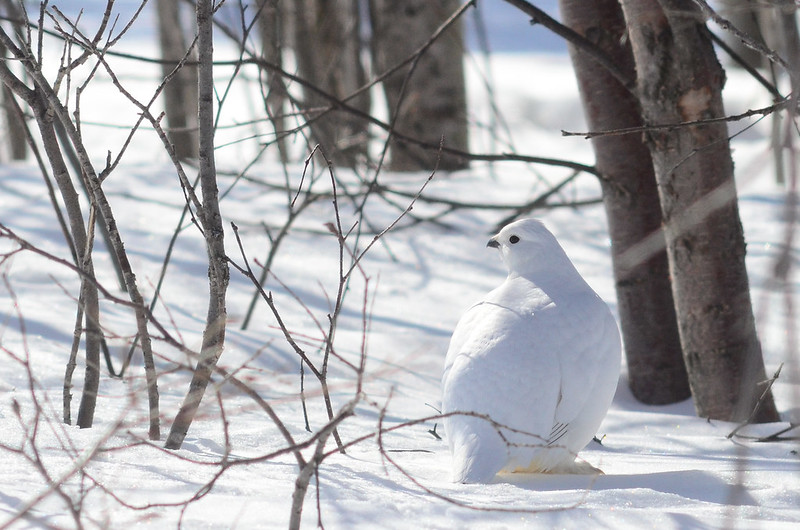 They seemed quite skittish (perhaps due to hunting pressure) but still allowed relatively close views. They were unperturbed when a snowplow blew past them, but eventually they decided that they'd had enough of us and flew across the road, which allowed us to see their black outer rectrices.

A fantastic experience! Ptarmigans were one of the first birds I remember learning about as a small child in Russia (there called "White Grouse") and it was really great to finally see a few - and in their winter finery no less. 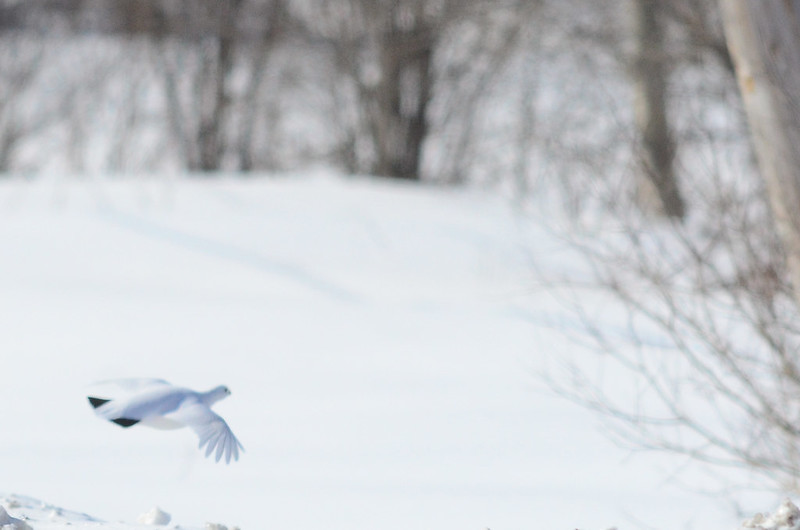 We lucked out in the fact that the birds were much closer than we had anticipated - about 160 km south from where we were planning to start looking. Now we had much more time to spend and bird in a relaxed pace. We drove a bit further up the road to see if we could find more ptarmigans (we could not) and then made our way south to Rouyn-Noranda, stopping at a small town to get gas, cheese curds and admire the lovely Evening and Pine Grosbeaks coming to the bird feeders.

We tried to find Sharp-tailed Grouse on some backroads on the way down, unsuccessfully. Once we got down to Rouyn we decided to drive a road that Amanda and I had visited a few weeks back to look for owls. We didn't have any luck finding Great Gray Owls, but the very long-staying Northern Hawk Owl was still there and allowed for great views right beside the road. 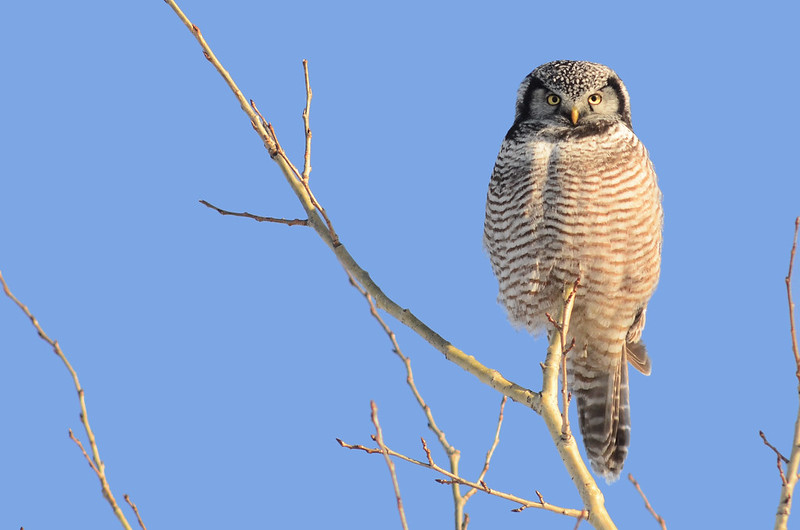 We were pretty tired from over 15 hours on the road and fell asleep pretty quickly!

We were only a couple of hours from Huntsville in Rouyn so we took our time driving back. As we drove down Amanda yelled "There's a hawk owl in that guy's yard!" We spun around to watch the hawk owl, this time at a fair distance but still in a very classic hawk-owl manner perched on the tip top of a spruce. A great bird, and one that I never really tire of seeing. 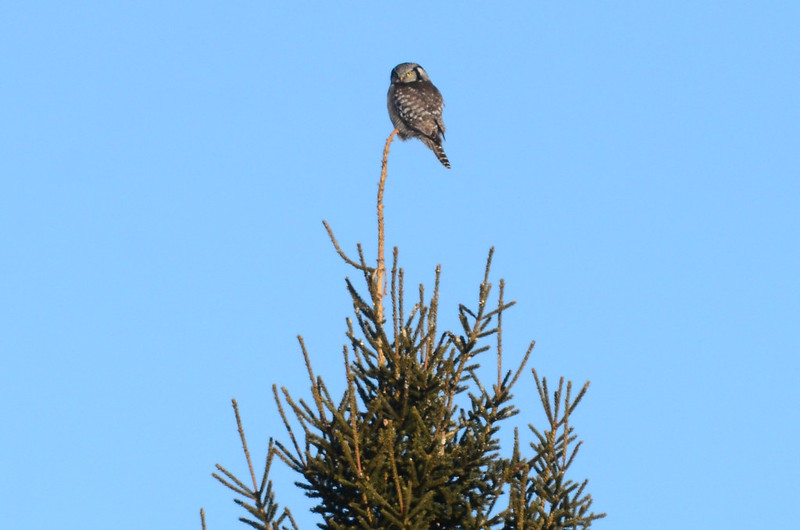 Which is good, because we had all simultaneously spotted yet another hawk owl, this time sitting on someone's antenna. It was fairly comical to see. This had been mine and Amanda's fifth Northern Hawk Owl sighting (four different birds) this year! Other groups of birders heading out to try their luck at the recent burn in Hearst, Ontario have also been seeing many of these charismatic owls. What a great year for this species in the north. 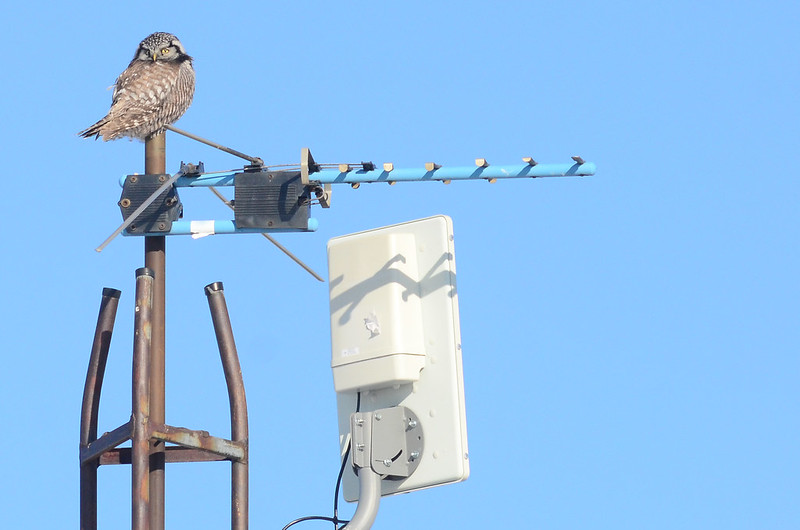 We arrived at Hilliardton at about noon. We decided to cruise some of the roads as there have been lots of finches and a Great Gray Owl around. It was a beautiful sunny day and kind of the worst time to look for Great Gray Owls, but birds sometimes don't do what they're supposed to. We drove the road where the bird had been seen in the evenings in the past without luck. I decided that rather than go back the same way, we could take another road that ran parallel just a little ways to the north. I was going at a pretty good clip when Amanda spotted a Great Gray Owl sitting on a fallen tree nestled in some alders at the side of the road! 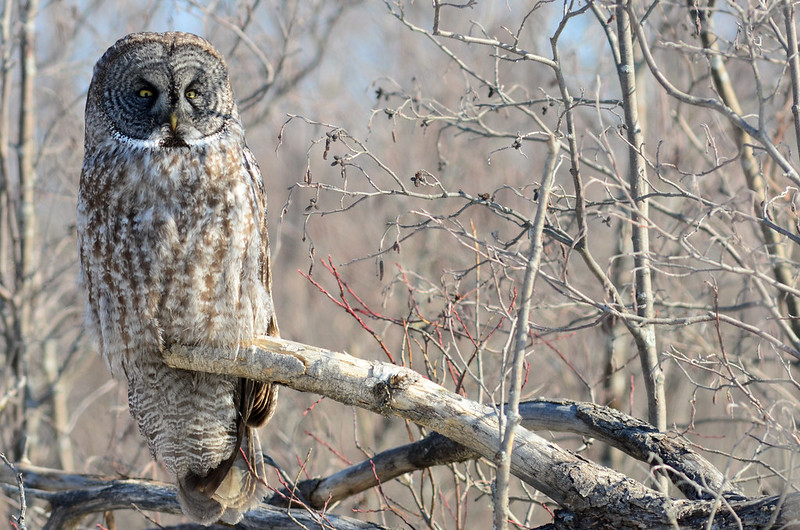 I was scanning the border of a field to my left as I drove, so when I turned around to back up, I noticed a second Great Gray Owl sitting right over the road! It was remarkable that these birds were out so late in the day in such bright sunlight. It looked smaller compared to the first one, so perhaps they were a pair. The sexual dimorphism isn't strong in this species, however, so that very well may not have been the case. 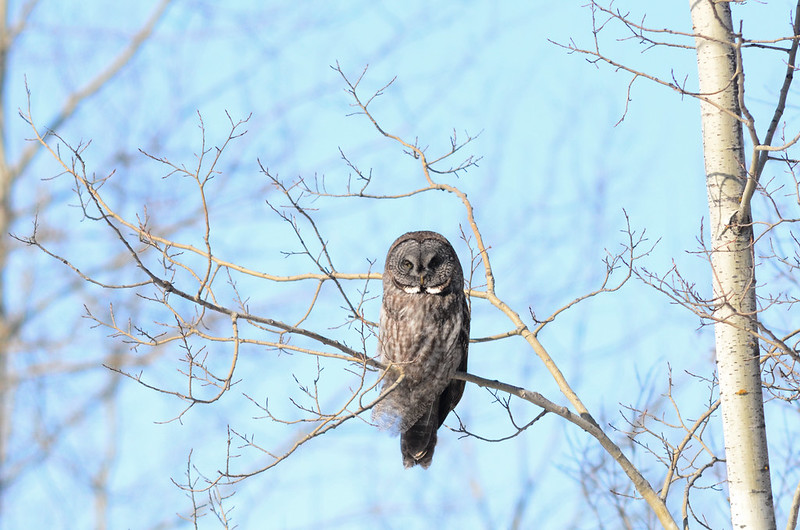 The one in the tree may have been hunting, but Amanda's bird was definitely roosting. It was in a sheltered area and had its eyes partially closed most of the time we watched it. We spent a good amount of time with the two birds. We could have probably got some excellent pictures in the great light if we waited, but the owls looked very content where they were, and we had neither the patience nor the desire to wait for them to do something and left them in peace.

Our drive back to Huntsville was relatively unexciting, but we arrived home with great memories of our trip to the boreal forest, and with plenty of time to get a good night's rest - a hot commodity in the world of birding! 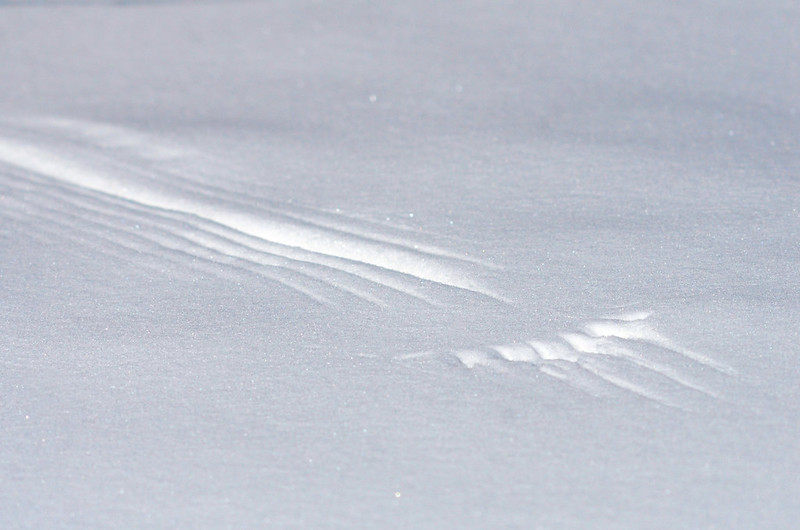 Lev Frid
Born in St. Petersburg, Russia and mostly raised in Ontario, Canada, I now drift across the globe in search of birds and other wildlife, based out of Huntsville, Ontario. Follow me on my quest to see as much of the natural world as I can.